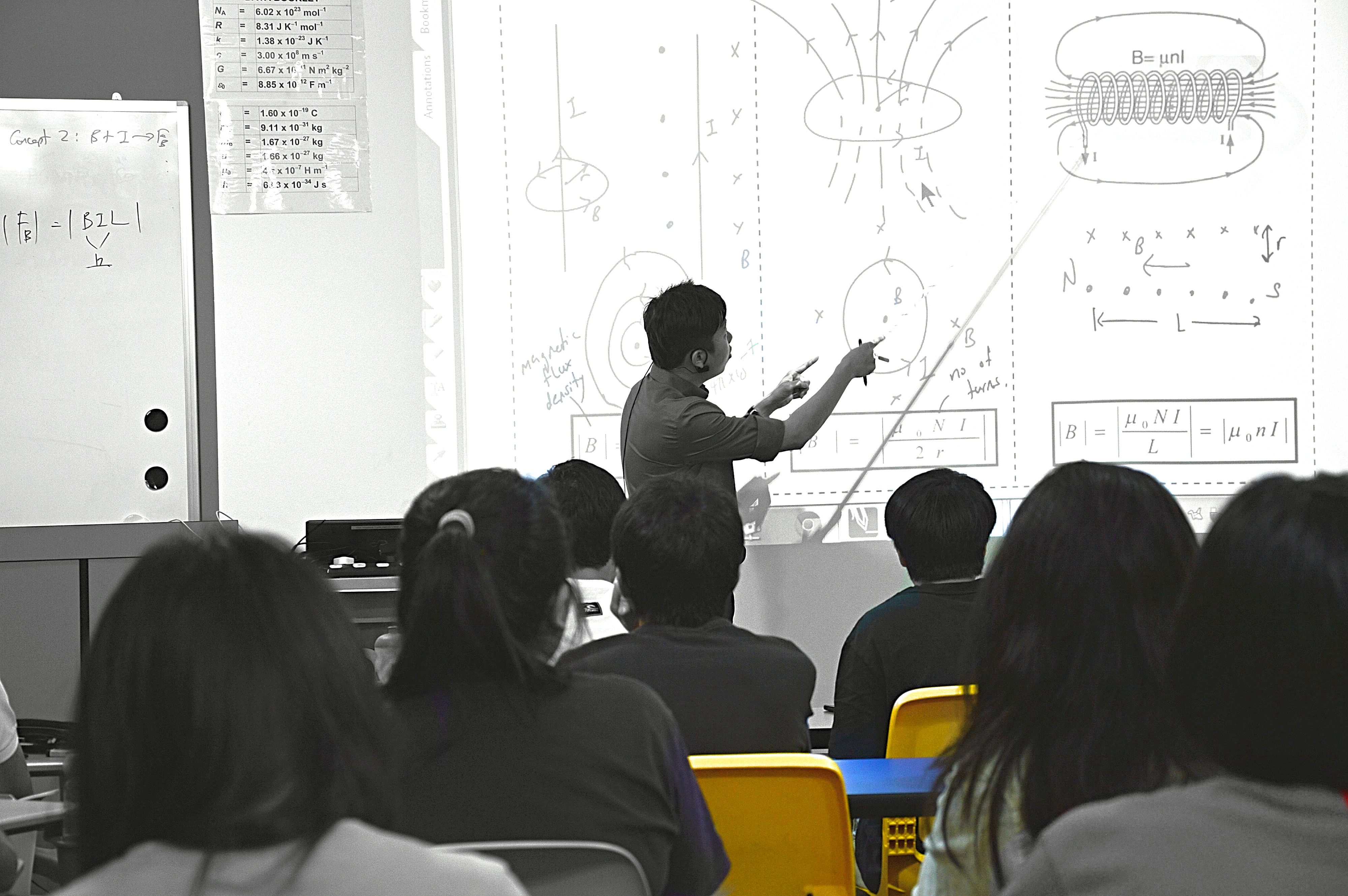 Posted at 21:10h in Favourite, PMC in Socia Media, PMC in the News by admin 0 Comments
0 Likes

On The Golden Girls, there’s a scene where a teacher speaks fondly about her favourite student: “He gets this look in his eyes when he’s listening. You don’t see that very often. I think that look is the whole reason that teachers teach.”

Dave Sim is familiar with that look.

Having taught physics at RJC (now known as RI) for six years, he knows how life defining a career in education can be. For every teacher committed in their craft, nothing beats the triumph of knowing they’ve made an impact on a student’s life.

Dave is a legendary figure in his students’ eyes. Thanks to his engaging and concise techniques on the perplexing subject, many of his students evolve from being a mediocre Physics student to an exceptional one. 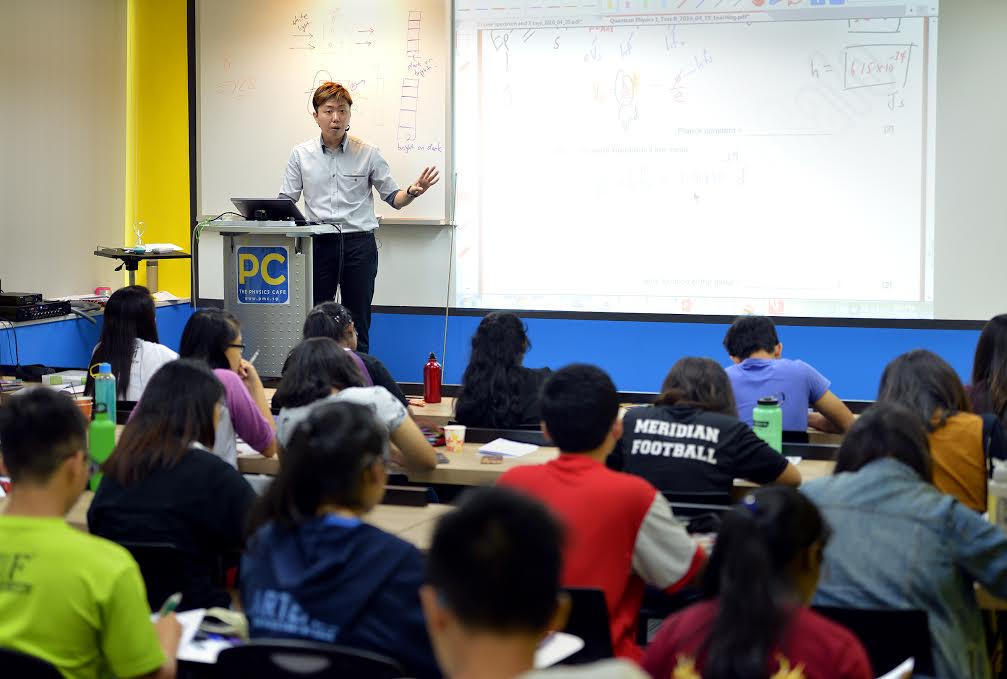 Dave is also unlike any other teacher.

For one thing, he wears a mic headphone while teaching. For another, he runs The Physics Cafe, a massive tuition centre where he serves as the director and head of academic.

Not only is his education centre half the size of a football field, but it also has its own cafe, digital library, scholarship programme, and shuttle bus service. The Physics Cafe is dubbed as a premium school — one look at the tutors’ tailor-made uniforms reflect that. 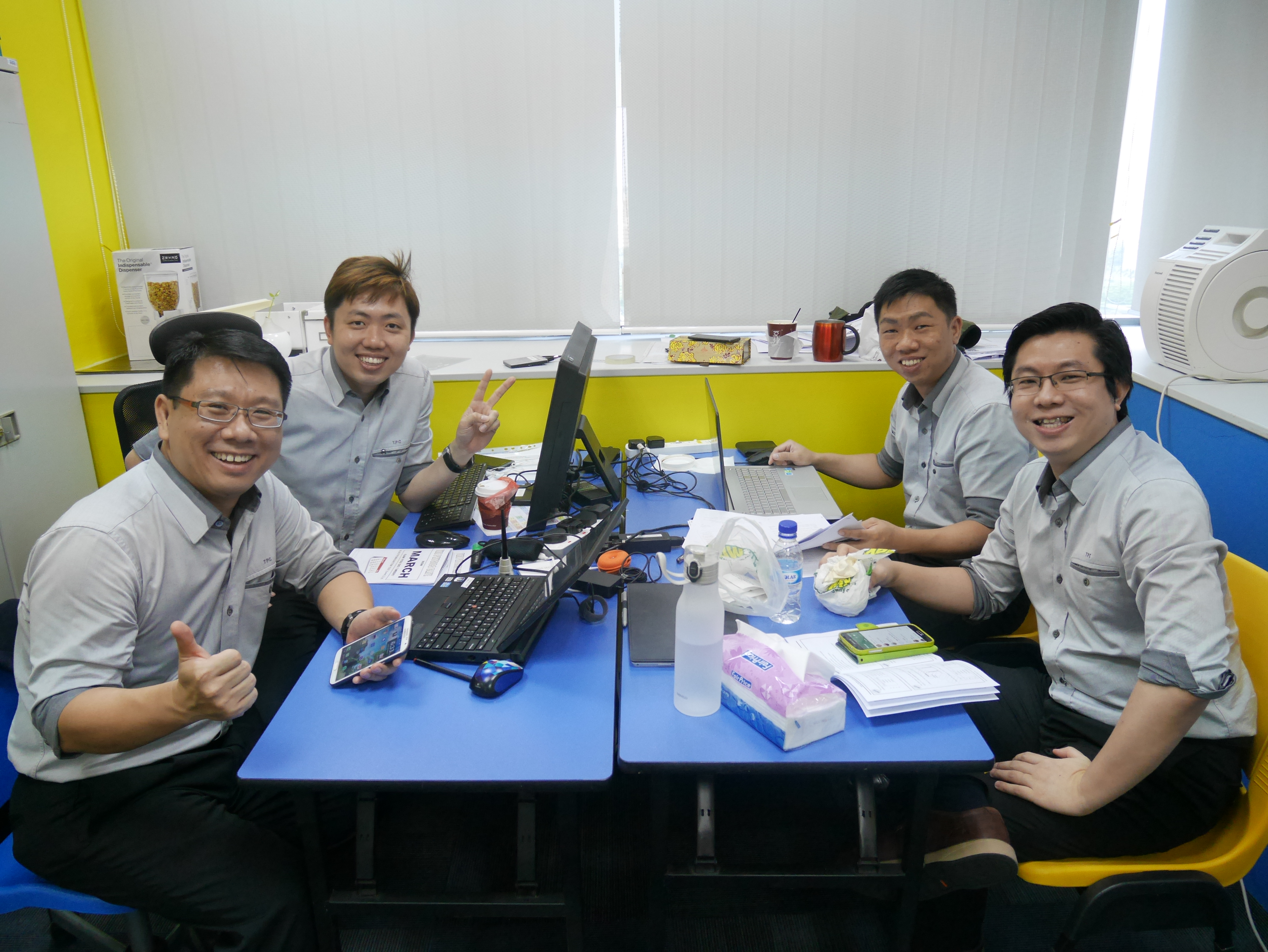 When Dave launched The Physics Cafe, he started small by enrolling only JC students. A big group of these students came from well-known schools like Hwa Chong Junior College and Anglo Chinese Junior College. At that time, there were about 200 of them.

Three years later, he decided to take the plunge by offering physics and maths tuition to both JC and secondary school students.

Dave shares he was mulling over opening the classes earlier, but he chose not to in the end. He had high standards and was determined to stand by it. Plus, he didn’t think the early launch would justify the amount of work he had put in. 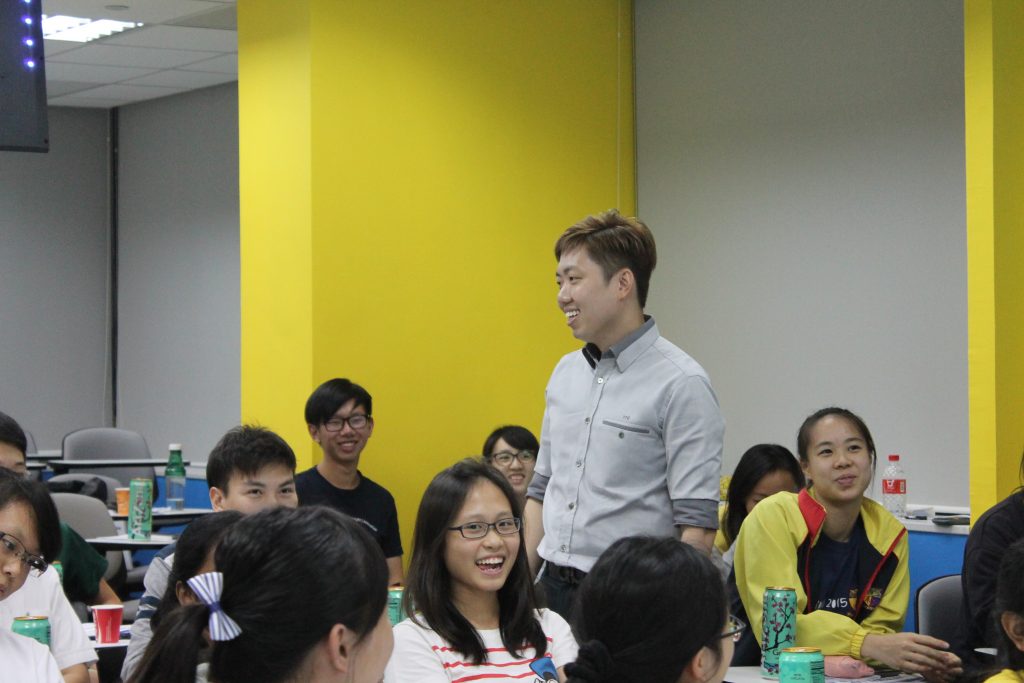 The amount of work for the launch was colossal.

Dave and his team spent not a week, not a month, but a year to put together their lesson materials. Fortunately, their Herculean task paid off. Right now, The Physics Cafe has close to a thousand students.

Judging by the statistics alone, it’s clear having tuition as a kid is a norm in today’s world; yet for Dave’s schooling years, it was the exact opposite. 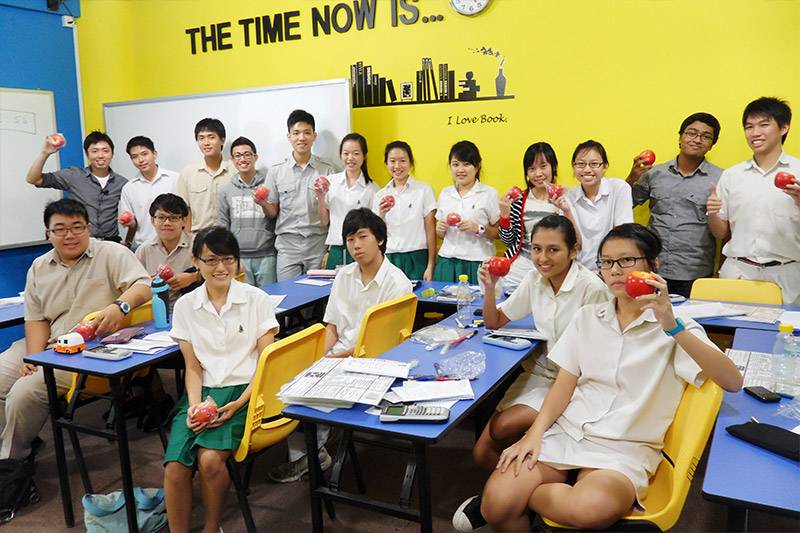 Never had tuition as a kid

Growing up, Dave was a studious kid. He had the habit of writing down his own set of notes, a practice that reaped the benefit in his career as an educator. “When I first started teaching, I was surprised how my ten-year-old JC notes helped my students understand the key concepts in physics,” he says.

A visual learner, Dave shares he finds it easier to study his own notes with his handwriting than pouring through his lecturer’s typewritten ones.

“I don’t like memorising individual equations and definitions. Instead, I remember the visual image of every page of my notes.” 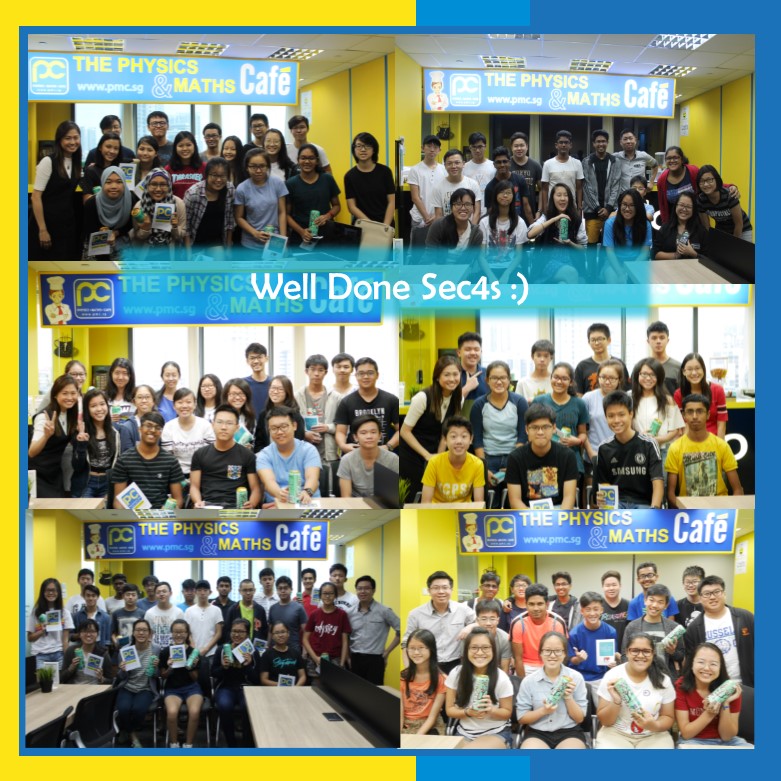 Since he couldn’t afford tuition, Dave consistently kept his nose to the grindstone. He reminisces his life as a student and how he’d used to spend hours solving just one question.

Nevertheless, Dave’s school life wasn’t too shabby; with determination and hard work, he managed to sail through his exams.

“Now I’m happy to help my students to save [the] time, leaving [them] more time for other things.”

Making tutoring easier for his students

Not only did his techniques got his students out of a tight spot, but The Physics Cafe’s ambassador programme — an initiative that covers partial and full scholarship — has also lightened their load.

How does one qualify for the role of an honourable ambassador?

“The ambassador of the school should be a role model for these students. He or she will be responsible for collating the exam results from the students so that we can see how the student fare relatively, compared to their peers,” Dave shares. 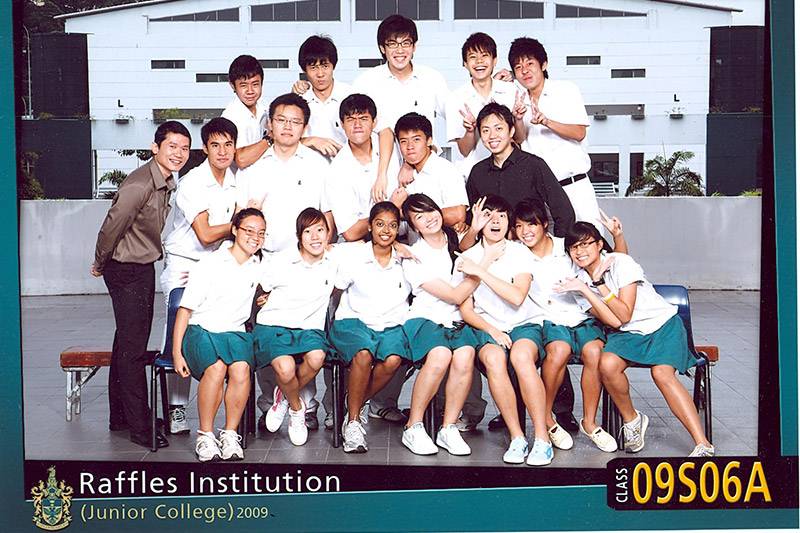 Expanding the tuition centre was also a natural decision. The number of students were growing and the space couldn’t accommodate their needs. Currently, the school is nestled in Toa Payoh.

On top of that, The Physics Cafe is also taking a beat from MOOCs by offering video lessons for students who are unable to afford the tuition fees.

With this approach, students pay half the usual fee to attend the same lesson, with the same tutor, and the same materials in the comfort of The Physics Cafe’s very own digital library.

Dave also shares several insights about today’s tuition market. “We have to accept that the trend today is very different. Students who go for tuition are not weak academically or ‘kiasu’ in nature,” he adds.

“Most students in Singapore attend tuition classes to “stretch time”, so learning will be more effective.”

Back on 2014, The Straits Times reported that Singaporean families have spent $1.1 billion on tuition alone ; so much that even tutors are earning higher salaries now. Many cite competitive edge as one of the reasons. However, judging by what Dave has shared, it appears there’s more than it looks.

Smart learning is a trend and it’s sticking for good.